With funding from the New York Community Trust, ULI New York held a Technical Assistance Panel (TAP) focused on a waterfront community in New York City vulnerable to climate change. This TAP was held in Hunts Point, Bronx on March 28–29, 2019 in partnership with the New York City Economic Development Corporation (NYCEDC). Through this work, ULI New York members focused on assessing the viability of hydropower in the Hunts Point neighborhood of the Bronx. To conduct the TAP, the NYCEDC asked ULI to answer questions related to the benefits and feasibility of hydro energy as a form of resilient and sustainable power and consider its relevance to the overall resilience of Hunts Point and its food distribution systems. The study area focused on the Food Distribution Center (FDC)—a network of distribution businesses located on the Hunts Point Peninsula in the Bronx—which is responsible for the distribution of nearly one-half of the food that feeds the City. Bordered by the Bronx River to the north and east, and the East River to the south, Hunts Point is characterized by a large industrial area covering the western half of the peninsula, a compact neighborhood core of approximately 13,000 residents, and the FDC in the eastern section of the peninsula.

Chaired by Shay Alster, Principal at GF55 Architects LLP, the 7-member TAP engaged in two days of hands-on working sessions, kicked off with a briefing and guided tour of the study area led by NYCEDC. The TAP also conducted interviews with stakeholders to get a better understanding of community needs, hydropower technologies, and overall vision for Hunts Point; these interviews helped guide the working sessions. Ending with a final presentation to NYCEDC leadership and staff, the TAP concluded that while hydropower is not yet commercially viable for Hunts Point, there are other promising renewable energy opportunities that NYCEDC could pursue to achieve its goals and further climate resilience, green infrastructure, and high quality of life in the neighborhood. Keeping in mind the high cooling demands of the FDC, the panel’s recommendations centered around geothermal energy as the best suited option that would provide NYCEDC with the greatest potential for effective and resilient alternative energy production at Hunts Point. 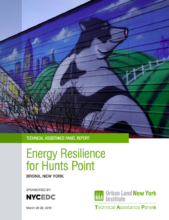