On November 14 and 15, 2017 ULI members from New York and Westchester/Fairfield completed a two-day Technical Assistance Panel (TAP) for the Village of Sleepy Hollow – located on the east side of the Hudson River 25 miles north of New York City – which is experiencing redevelopment activities and pressures that will reshape and impact the community long into the 21st century. Its blue-collar roots and past status as a factory town for General Motors appear evident in its eclectic mix of modest homes, narrow, hilly streets and century-old commercial buildings. It sits in the shadows of the new, $5 billion dollar Hudson River bridge that will bring new traffic and economic development to its streets. In addition, and most importantly, the GM auto manufacturing plant closed in 1996 and is now being redeveloped as a 1,100-unit luxury housing community (Edge-on-Hudson) across the railroad tracks from a low- and moderate-income, largely immigrant neighborhood. In this context, the Village Board of Trustees, led by the mayor, sought the outside advice of the Urban Land Institute.

Chaired by Kim Morque, President at Spinnaker Real Estate Partners, the 8-member panel were tasked with proposing strategies to manage the change emanating from the large housing project and integrate it appropriately into the community, and to revitalize and incentivize development of the Village’s commercial corridor, Beekman Avenue and the housing in the lower income neighborhoods. The panel’s objective was to propose strategies to connect the new housing to the Village and encourage/ incentivize investment in its downtown area that celebrates Sleepy Hollow’s diversity and history while welcoming new residents and not pushing out lower income households.

The TAP process calls for two days of intense study and analysis by the panelists to develop recommendations in response to the proposed scope of work. By the end of the second day, the panel crafted recommendations for addressing the core issues outlined in the scope, building on the Village’s unique history, character and strengths. The panel centered on two strategies as catalysts for development of the study areas, as well as short- and longterm implementation recommendations. Those two strategies are connectivity and placemaking. 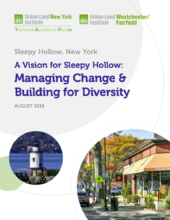