On August 10, 2017, ULI members from New York, Washington, and Maryland completed a special 1-day Technical Assistance Panel (TAP) Workshop in Manhattan. This ULI New York TAP was made possible through generous grant funding from The New York Community Trust. The Urban Land Institute was awarded a $100,000 grant in July 2016 to raise awareness and encourage the use of resilient building practices in New York City, and to foster a greater understanding among the public and private sector nationwide regarding the many benefits of building for resilience. Through this grant, ULI New York will complete two TAPs in New York City to identify practical approaches to resilience building that help communities be better prepared against rising seas, flooding, and other natural disasters.

ULI New York partnered with Manhattan-based non-profit, Waterfront Alliance, to provide private sector feedback on their Waterfront Edge Design Guidelines (WEDG) program – or what they often call “LEED for the Waterfront”. The Waterfront Alliance asked ULI four key questions in evaluating and recommending incentives for developers and landowners to engage with the WEDG ratings and certification program, surrounding primary incentives, economic benefits of using credit programs, developer engagement, and insurance and risk reduction incentives. WEDG is currently underdoing a revision process, in part to develop a program that is applicable to waterfront development beyond the New York-region.

Chaired by Peter Liebowitz, Vice President at WSP, the 12-person panel provided a series of recommendations and analysis of the program in its current form. The panel team was largely complimentary to the program – Waterfront Alliance has done an excellent job in identifying the need, establishing guiding principles, engaging a broad range of interested parties, and developing consensus within the waterfront community. Below is a summary of the panelists’ recommendations: 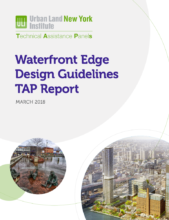